Vancouver, BC – April 24, 2014 – 16 students squared off in this year’s Regional 2014 “Sanofi BioGENEius Challenge Canada (SBCC),” each of them presenting their biotechnology research and life-changing discoveries.

All of the students are deserving of recognition for their research, however five students have been named the regional winners. 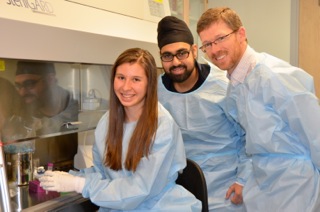 Forth prize went to Lasya Vankayala of David Thompson Secondary School in Burnaby who studied “The Effect of UVA Light on the Healing Time of Skin Fibroblast Cells: A Study of Wound Healing Dynamics.”

A special prize, the “Discovery Parks Commercialization Award” for the project with the most commercial potential was awarded to Austin Wang of David Thompson Secondary School in Vancouver and his project titled “Analyzing Changes in Bacterial Communities in Microbial Fuel Cells.” Austin also scored 5th in the overall competition.

The winner of this competition, Nicole Ticea, will enter the national competition held at the headquarters of the National Research Council in Ottawa, on May 22, 2014, followed by the SBCC National Awards Ceremony, co-presented with the Partners In Research National Awards, on May 23, 2014.