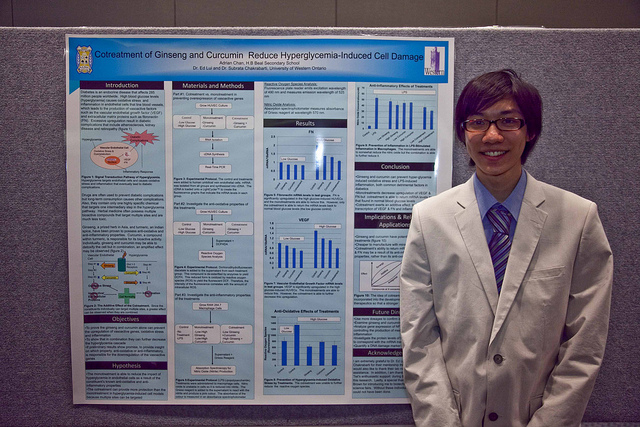 Adrian Chan participated in the Sanofi BioGENEius Challenge Canada in 2009 and 2010. His project in 2009 examined the role of the protein TRIM22 in inhibiting HIV replication.

Currently working on a degree in Microbiology and Immunology at Western University and interning at Sanofi Pasteur, Adrian strongly believes that his participation in the SBCC has helped him get to where he is today. In this interview, Adrian provides a lot of insight and advice for students who are interested in submitting a project to the SBCC.

I first participated in SBCC 2008 – 2009 when I was in grade 11. My project was titled “Importance of the Antiviral Patch in TRIM22 Towards Blocking HIV Replication.” This project investigated the role of the protein TRIM22 in inhibiting HIV replication. I removed a structural part of the protein (nicknamed the “antiviral patch”) that was determined to be under strong evolutionary selection in primates. It was thought that this antiviral patch is required for TRIM22 to block HIV infection. My research showed that this deletion was not required for TRIM22 to block the release of HIV, so this suggests that there are other possible sequences that may be responsible for the anti-HIV effects of TRIM22.

I’m currently interning at Sanofi Pasteur in Toronto in the Component Pertussis (CP) Department, which is responsible for manufacturing the 5 acellular components of the pertussis vaccine. I’m working in the Media, Washing, and Sterilization section of the manufacturing facility so my daily schedule entails cleaning and washing all sorts of equipment the facility uses to produce the pertussis antigens. In the office, I help out with side projects when I’m finished with production work, which includes small-scale optimization experiments, equipment validation, and procedural writing.

What motivated you to participate in the SBCC?

My biology teacher in grade 11 approached me to ask me if I was interested in participating in the SBCC (at that time known as the SABC). I was always good at science, and my teacher knew that so he strongly recommended I try it out. A student a year earlier was the first student from my high school to participate and she had a very positive experience. She had won first place in the regional competition in London and competed in the national competition in Ottawa. Based on her experience and my teacher’s encouragement, I applied and ended up partnering up with a professor from Western in the Department of Microbiology and Immunology.

It was really interesting! I remember entering the lab the first time and being amazed at the research environment. I saw glassware lined up on shelves, expensive lab machines, and grad students working hard on experiments. I was very nervous but at that the same time excited for the chance to be like those grad students.

My professor at Western University, Dr. Stephen Barr, was very welcoming and supported me throughout the process. I was learning concepts beyond my high school classes and working with chemicals and equipment that I did not want to know the prices of (haha). After I was thoroughly trained in the lab, I was given the independence to run my own experiments at my own pace. When I came into the lab after school, I knew exactly what had to be done and how to do it. This kind of freedom was something I had never experienced in a high school lab so I always looked forward to going to the lab, despite leaving pretty late on some occasions.

Near the competition date, it did get a little stressful, trying to wrap up experiments and data analysis, but I enjoyed it. The competition itself was also exciting. I remember being extremely nervous presenting my project to the judges and audience members, but I was also very excited to let everybody know about the research and results that I had poured all my time into.

When the day was over, I remember feeling relief that I would have time to relax (haha) but also that I had accomplished something that most other students would only get to experience in perhaps their fourth year thesis. I was proud of my work and the dedication I gave to it, so I left with an experience that I knew had changed my life.

How has your participation helped you beyond high school?

When applying to universities in grade 12, I partly chose Western due to the fact that I already had a good relationship with my professor so I didn’t want to lose that. When I started going to Western, I reconnected with Dr. Barr and he agreed to let me join his lab again. I was really grateful because after class, I knew that while my classmates were studying from lectures and textbooks, I was actually applying the knowledge I learned from class in a real lab setting. I was given the opportunity (again) to do work that other students didn’t have the chance to do so I was both humbled and grateful.

I continued to hone my lab skills and knowledge in the lab, which made my undergrad in science much more fulfilling and enjoyable. And I believe the skills I gained in my professor’s lab allowed me to be competitive in the internship program at Western, which allowed me to obtain my current position at Sanofi. I really believe I could not be where I am today without the support of my professor, which was all thanks to the SBCC.

Describe your favourite aspect of participating in the SBCC.

Definitely the independence of doing experiments by myself. I was really grateful because I knew my professor trusted me enough to run the experiments, which motivated me to want to succeed and live up to his expectations. In the two months I worked in his lab, I think I learned much more about science and research than I did from grade 9 – 11!

Overall, it was such an enriching experience; I loved being able to actually do the science I was learning in school, and that really opened my eyes to the whole biotechnology/research side of science.

Enjoy the process and don’t be shy to ask questions. You have support from your mentor and grad students in the lab who want you to succeed and learn as much as you can. You’re doing things that people don’t get the chance to do until their 4th year of undergrad — be sure to learn as much as you can and enjoy the experiments you’re doing! You may not have such independence until later in your undergraduate years.

Why do you want to promote the SBCC to future participants?

I truly believe the SBCC changed my life; it gave me direction in what I wanted to do in the future. When I was in first year, while my other friends were still deciding whether they wanted to stay in science, I already had decided what kind of science to major in (microbiology and immunology). I was inspired by my SBCC project and professor to major in the department where I did the work.

The skills that I learned while working in his lab were crucial to my personal and professional development. I became more focused, self-motivated, accurate, fast-paced, and detail-oriented — all of which are important soft skills that I believe allowed me to succeed in getting my position at Sanofi.

Having come so far, I really want other high school students to have an experience like mine where they can see what science actually is and how it works — and whether they want to continue in such a path.

And students might as well try the SBCC right? Since it’s free to participate — and students will pay a fortune in tuition to eventually complete a thesis in the 4th year of university — there’s no harm in trying when the costs are already generously funded by Sanofi and other sponsors who understand that students can have a brighter future if they’re just given an opportunity to succeed!