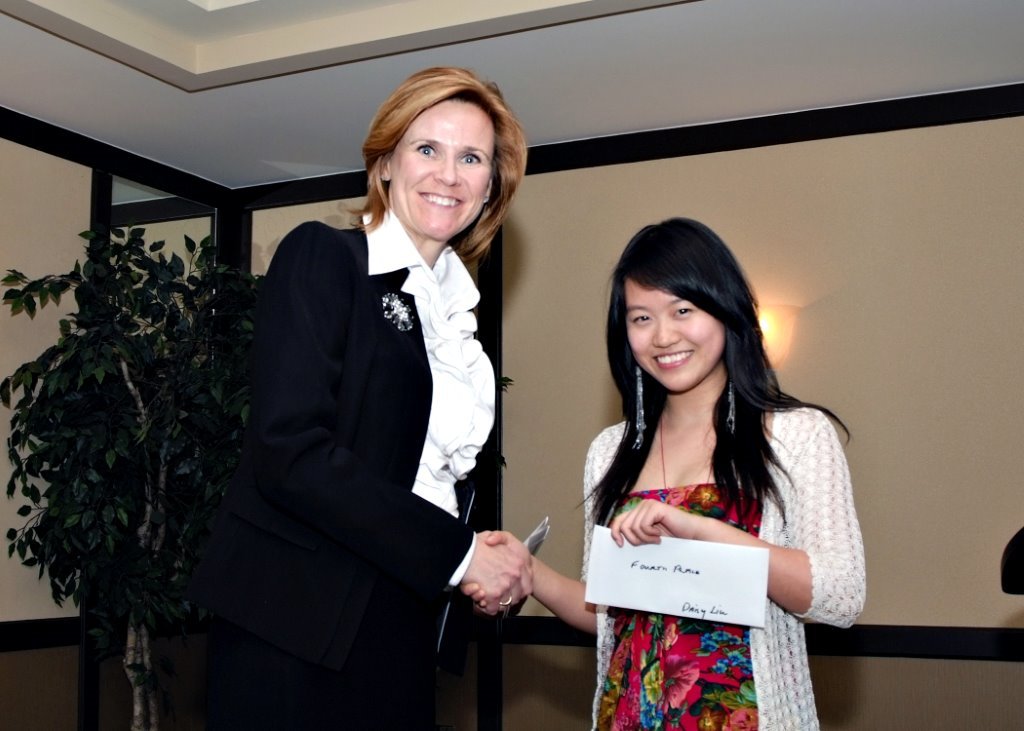 Daisy participated in the SBCC in each year of high school (2010-2013), winning second place at a national science fair competition in 2011. She says the SBCC helped her realize her potential and has given her invaluable experience and confidence as a first-year student in both the Science and Concurrent Education programs at Queen’s University. Daisy provides a lot of insight, wisdom, and advice for current high school students interested in participating in the SBCC and pursuing a career in science. 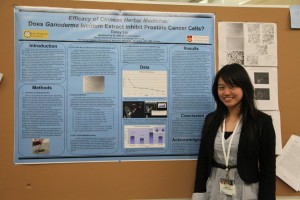 Recalling my history with the SBCC is fascinating because it clearly reflects my growth in the program. I was in the ninth grade (2010) when I first participated in the SBCC program. I had entered with a partner and we were completely mind-boggled at the idea of being able to investigate and experiment on our own. Needless to say, we aimed right away at curing a disease — cancer was the first to come to mind. However, after a few discussions with our mentor we learned that science happens in smaller steps.

That year we entered a project that looked at the antioxidant properties in a bioactive compound called oleocanthol in olive oil that exhibited promising preventative effects on DNA damage through oxidative stress. We did not end up placing in the competition and received a bronze medal at provincials but were incredibly inspired nonetheless.

The following year (2011), I entered the competition alone with a new idea in mind; inspired by oral tradition and the purported benefits of various types of traditional Chinese medicine often spoken of by my grandparents, I decided to investigate the scientific validity of Tremella fuciformis’, a type of fungi that held medicinal properties, effects on cancer cells. When I looked at this fungus’ effect on oxidative stress, I found that it did, in fact, contain polysaccharides that had protective properties against DNA damage caused by a certain carcinogen (benzo[a]pyrene). I placed second in my category, won best overall intermediate project in provincials, and went to the Canada-Wide Science Fair with this project winning a silver medal and a scholarship to Western University.

For my fourth and final year in the SBCC, I planned to look into the genetics side of things. I had planned out how things would go ideally, but unfortunately, things did not go as planned. After several failed attempts at cell culturing, there was not enough time left for the experimentations. My mentor, Dr. William Diehl-Jones, was extremely patient and supportive until the very end when we decided two weeks was not going to be enough time to complete my project. I was not able to participate in the SBCC in my senior year of high school, however, I was still very much active throughout the season. This was the year I was able to help my peers improve their presentations, hold mock judging sessions, and provide advice and consultations about what the judges often look for and like to see. I was also a photographer at the awards ceremony that year. It felt very different being more behind the scenes, but it was change that I enjoyed and learned from.

In my grade eleven year (2012), I again looked at traditional Chinese medicine, but this time, at one of the most potent medicinal fungi:Ganoderma lucidum. I found that the bioactive component found in the spores of this mushroom is able to cause a significant decrease in prostate cancer cell proliferation and also investigated whether the effects were experienced in the cell mitochondria. This project was ranked fourth in the senior category in SBCC. Again, this was something I was not expecting, considering the ever-increasing caliber of my peers. In the summer of 2013, I was fortunate enough to be able to participate representing Canada in the International Science Fair in Adelaide, Australia where I presented this project. I presented again at the International Student Youth Forum in Singapore this past January (2013).

If I were to choose one word to describe how the competition process felt to me, it would be invigorating. I was extremely energized and engaged throughout the whole duration of every competition. Every project was intriguing and creative, and there was a perfect blend of the vigor of competition and the awareness that everyone had already won in one way or another. I felt like my role in the competition was not to necessarily beat out other participants for awards, but rather it was to learn from them and to hopefully have them learn something from me as well. It felt extremely rewarding to be able to share the story behind the product of your hard work and have people who were genuinely interested listen and provide feedback. During the actual judging process, I believe everyone felt as if they were in the same boat; we tried to explain our research to best of our ability and hoped that our audience found it as captivating as we did. We also hoped for a minimum number of difficult questions, but thinking back, that was all part of the fun! It was during these competitions each year that I felt like we realized what we were really capable of.

How has your participation in the SBCC helped you beyond high school?

SBCC was a very rewarding part of my life and there isn’t a minute of it I regret. Of course, I have gained technical knowledge in the field that I am interested in for a potential career.

Now that I’m in university, I feel extremely fortunate to have a background in lab work that is comparable to that of a second or third year university student. It has really prevented me from being blind-sided by the higher-level expectations and new concepts of research that have taken many of my friends, who weren’t in SBCC, by surprise. I feel confident doing introductory lab work because they are mostly procedures with which I’ve already become familiarized.

Furthermore, participating in the SBCC program has strengthened my social skills immensely. Through presenting my projects to the judges, I’ve learned how to professionally interact in such settings and discuss matters with mentors and professionals in the field. I’ve also learned how to communicate coherently and comprehensively while still attempting to be concise; it is much more difficult than it sounds, especially with a time limit. Finally, it’s given me insight into my future. Prior to competing in the SBCC, I vaguely knew that I wanted to pursue a career in medicine, likely as a physician, but it seemed that besides good grades, I had nothing that really suggested that that was a possibility for me. I was missing the passion and interest that I gained through participating in SBCC. Science transformed from just being another subject in school into something I truly cared about and that which fascinated me because I saw that I could make a difference. Through SBCC, I discovered what I truly wanted to do in life and received the confirmation I needed to feel less lost as I head towards the medical field.

I am currently in my first year at Queen’s University as a Sciences student who is also in the Queen’s Concurrent Education program. I plan to pursue a degree in Life Sciences during which I will also be working towards achieving a degree in Education.

Why do you want to promote the SBCC to current high school students?

Evidently my experience with SBCC has been extremely beneficial to me; it was also one I enjoyed very much. I want to promote the SBCC to current high school students because I can relate to how many of them feel. Whether these students are the ambitious type who are looking for a chance to showcase their abilities or those who are feeling uncertain about what they’d like to do to in life, participating in the SBCC can help. This is a program that can help students realize their own untapped potential. There has not been a single year where projects have not met the standards of our supporters, judges, and volunteers in numerous fields because despite how challenging this annual project can be, students meet the challenge head-on and come out stronger, armed with knowledge, and spurred on by realizing how much they can achieve.

Through participating in SBCC, students also establish strong connections with their peers and professionals in their respective fields of study which are valuable to their future careers. I, for one, have been fortunate enough to establish such a network with people throughout Canada and overseas.

The two key ingredients to success and enjoying the entire SBCC process are the effort you put into your project and the passion you have for your research and ideas. These two go hand-in-hand.

While I was a participant, I saw a pattern emerge in that those who were genuinely interested in their research, not only worked harder, they were also able to convey their enthusiasm and passion through their presentations. The feeling of fascination is contagious. When you’re excited by your work, you allow others to feel curious and intrigued about what you’ve accomplished. One of the best ways to be genuinely interested in your work is if it is based on your own creative and original ideas; judges can definitely tell when your mentor has done most of the work for you.

Furthermore, an incredibly big factor in the outcome of competition is the way youpresent your hard work. I have always presented as though I was telling a story focusing on the big picture. This often helped my audience understand better and gives the presentation a comprehensive structure. In the end, it is most important to try your absolute best going in with an open mind because that is when you realize how much you’re truly capable of.