We interviewed Ted Paranjothy, a multi-year SBCC alumnus, and a “triple crown winner” – winning the regional, national, and international competitions – of the SBCC in 2007. His winning project studied an innovative cancer treatment that he continued to work on and commercialize beyond the SBCC. Ted tells us more about this project, his challenges and successes, and why the SBCC is a unique opportunity for youth to develop professional skills and career direction. 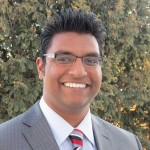 I first became exposed to the ABC when I was in the ninth grade, which is when I first learned about and became truly fascinated and intrigued by biotechnology. I entered four projects into the competition over this timeframe, out of which the last two were in the realm of cancer research and were directly linked to each other. These projects — my third and fourth projects — were focused on a small protein derived from the chicken anemia virus known as apoptin which has the natural ability to selectively induce apoptosis (programmed cell death) in cancer cells whilst sparing healthy normal tissue.

For my third project, I demonstrated that smaller engineered peptides derived from the apoptin protein could independently induce apoptosis in human leukemia, breast, lung, and prostate cancer cells while sparing healthy tissue. In my fourth project I determined the 3-dimensional structure of these peptides using complex techniques used in organic chemistry (read more about Ted’s motivation for these projects).

Beyond the SABC I continued to work on this project briefly before transitioning to working on translational cancer research projects with a more clinical focus. I have also judged the SBCC at the provincial level (Manitoba) on multiple occasions as well as at the national level. I have offered educational and career advice and shared my experience with students from the United States, Canada, and Australia as a part of the International BioGENEius Challenge as well.

I completed a Bachelor of Science (B.Sc) degree with a major in microbiology with distinction from the University of Manitoba and I am currently a student in the Master of Biotechnology (MBiotech) program at the University of Toronto. I am also a Marketing Associate within the Future Portfolio group at AstraZeneca Canada.

What motivated you to participate in the SBCC?

When the regional SBCC representative for Manitoba came to my junior high school and introduced the students to biotechnology for the first time, my mind began to race with ideas of how to harness the power of biotechnology to produce a good or service that would be beneficial to humanity.

This competition was unlike anything I had heard of before and I felt that it presented me with the perfect opportunity to apply my knowledge outside of the classroom in order to solve complex real world problems. Unlike other extracurricular science opportunities that existed at the time, the SBCC was unique in that it focused on the interface of business and science with a strong emphasis on commercialization.

This program also offered one-of-a-kind exposure to post-secondary research while still in secondary school which was great because the cost of the mistakes I would make would be very low because I was only in junior high. Add to this that there was no fee to participate, that participation was voluntary, and that you could invest as many or as few hours as you liked into your project and I felt, with all this flexibility, that there was no reason not to do it!

Ultimately the competition process could be characterized in a multitude of ways but can be described as eye-opening, career-shaping, character-building, exciting, challenging, intense, and rewarding. Participating in the competition was eye-opening because it exposed me to advanced techniques in biochemistry, cell biology, genetics, and molecular biology and it even led me to develop expertise in these areas before graduating from high school. It also exposed me to the field of cancer research and to the broader view of peer-reviewed research in general at a relatively early age.

SBCC was also career-shaping in that the experiences I had during my early educational development, in the years that I competed directly in the competition, influenced my decision to pursue a career that had a strong focus on science, business and industry.

Based on my experiences, I would also characterize the SBCC as character-building because failure develops character to a far greater degree than success. There were numerous times throughout all of my SBCC projects when experiments failed and I found myself repeating the same assays or tests over and over again, sometimes dozens of times. With each failed experiment came painstaking troubleshooting and detailed analyses to try to make the next experiment succeed.

How has your participation helped you beyond high school?

Beyond high school, my participation and SBCC experiences have helped me in that I have had the opportunity to co-author three peer-reviewed articles in the area of cancer research (two of which I co-authored in high school and the last of which I co-authored in my first year of university) and file a patent on a series of apoptin-derived peptides that selectively induce apoptosis in human leukemia, breast, lung, and prostate cancer cells.

Most importantly, however, SBCC has helped me beyond high school via the transferable skills that I developed as a direct result of my participation. Written and oral communication skills, critical and analytical thinking and problem solving skills, presentation skills, organizational and stress/time-management skills and even social and interpersonal skills are some of the many transferable skills that I first began developing seriously during the SBCC.

I have also had the opportunity to work as an intern at Sanofi Pasteur Canada in the Immunology Platform of the Analytical Research & Development (ARD) division of the broader Research & Development (R&D) department. I believe that my experience with the SBCC and the expertise I acquired throughout serves as the core foundational experience for and as the earliest beginnings of my career.

Perseverance and persistence are qualities that you must embody not only for a career in science but for any career. My advice for this year’s participants is to take pride in your work and to do what you love, are passionate about, and strongly believe in. Furthermore, my advice is to have an open mind, be willing to try new things, be open to change, and be flexible and versatile in all the things that you do. Be analytical, think critically and carefully about everything you do and don’t be afraid to take calculated risks.