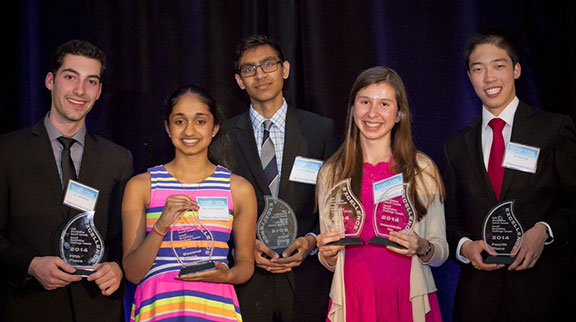 OTTAWA, May 23, 2014 – A novel method of HIV detection for newborns under the age of 18 months and for adults before three months post-transmission earned a grade 10, British Columbia student top national honours today in the 2014 “Sanofi BioGENEius Challenge Canada” (SBCC).

Nicole Ticea, 15, from York House School in Burnaby, BC was awarded the top prize of $5,000 and the Commercialization Award by a panel of eminent Canadian scientists assembled at the Ottawa headquarters of the National Research Council of Canada (NRC).

See a full project description below and online here: http://sanofibiogeneiuschallenge.ca/2014/05/23/sbcc-2014-national-competitor-project-descriptions/

Ten brilliant young scientists from nine Canadian regions, all just 15 to 18 years old, took part in the national finals. They had placed first at earlier regional SBCC competitions, conducted between March 27 and May 22, 2014.

High school and CEGEP students from Victoria to Saskatoon to St. John’s, focused on biotechnology fields of discovery and study, submitted more than 200 proposals. Working closely with mentors, these students conducted research in diverse areas such as telomeres, diabetes, stress management, Alzheimer’s, autism and pulp production. Since its inauguration in 1994, more than 4,700 young Canadians have competed in SBCC, with the majority of competitors going on to pursue careers in science and biotechnology.

1st place winner, Nicole Ticea will compete for Canada on June 22-25 at the International BioGENEius Challenge, conducted at the annual BIO conference in San Diego, CA.

Sanofi Canada President and CEO Jon Fairest, who presented the top national prize, said, “The Sanofi Group is very proud to be founding sponsors of the Sanofi BioGENEius Challenge Canada and participate in this inspiring competition. With its 21-year heritage, the SBCC shows how critical partnerships are to advance science and talent in Canada. From the mentoring provided by dedicated academics, to the support of government and the private sector, the SBCC truly stands out as a model for collaboration. The program is one response to Canada’s national priority of encouraging skills development, education and jobs in STEM (Science, Technology, Engineering and Mathematics) fields.”

The SBCC gives young scientists access to professional labs and academic mentors, encouraging the pursuit of future studies and careers in the country’s fast-growing biotechnology sector.

Each of the students worked for months conducting research and collaborating with university mentors.

1st Place Project Title: Isothermal Nucleic Acid Amplification System for Point-of-Care HIV Diagnosis. The project presents a novel method of HIV detection in developing countries. The test is capable of diagnosing HIV in newborns under the age of 18 months and for adults before three months post-transmission. It is the first test capable of analyzing HIV viral nucleic acids in a point-of-care, low-resource setting.