For more than 25 years, over 6,000 remarkable high school students have taken part in the Sanofi Biogenius Canada, pushing the boundaries of science with cutting-edge projects that hold real-world, life-changing potential. Here are just some of the whiz kids who have taken part in years past – and the amazing discoveries that have since opened doors to exciting opportunities. 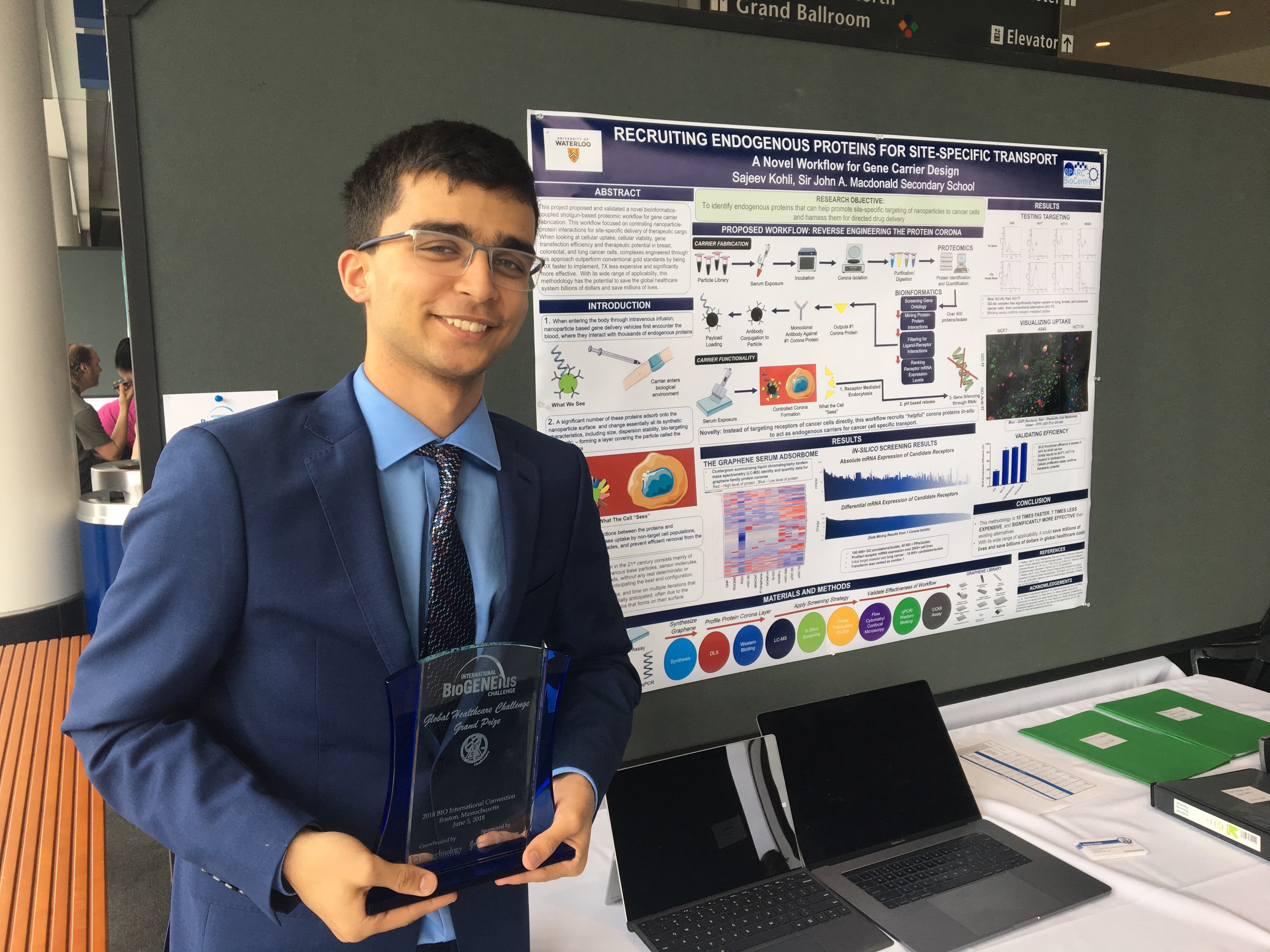 Sajeev’s passion for science began before entering high school. As an elementary school student, he reached out to nearly 100 professors before securing a mentor at the University of Waterloo. Sajeev spent his first year under his mentor writing 75-page project proposals to prove his competence before he was granted access to the lab.

In 2017/2018 as a grade 11 student in Waterloo, Ontario, Sajeev attended school during the day while working on his project “Recruiting Endogenous Proteins for Site Specific Transport” at night. The project idea came to Sajeev after witnessing the pain and agony his uncle went through with the diagnosis and subsequent treatment of kidney cancer. Sajeev was successful in his goal of finding a treatment option that is less invasive and less painful to go through. He created a new way to build nanoparticle based drug carriers that can be programmed to travel to and deliver drugs to a particular part of the body. This treatment has been applied to cells from lung, breast and colorectal cancer and has shown to be 10 times faster to implement, 7 times less expensive and 5 times more effective than existing gold standards for cancer treatment. With some modification, this treatment can be applicable to other types of cancer or even other diseases.

Sajeev’s research led him to begin work in about 10 different labs at the University of Waterloo, each of which offered him something different; he also frequently visited the SPARC Molecular Analysis Facility at SickKids for data analysis. It wasn’t long before his proficiency drew the attention of others. Sajeev was often misidentified as a graduate student and asked to perform data analysis for other researchers at the University of Waterloo.

In 2018 Sajeev’s project won him first place in both the regional and national Sanofi Biogenius Canada competitions. Upon winning the national competition he was given the opportunity to compete at the International BioGENEius Challenge in Boston where he won the grand prize in the Global Healthcare Challenge. Sajeev is the first Canadian since 2004 to place first in the regional, national, and international competitions.

When asked what advice he would give to a student looking into the SBC, Sajeev said, “Never be afraid to pursue something you’re passionate about. Situations may seem difficult, you may become frustrated, things may seem to never work, but always stay persistent and always believe in what you are doing because as long as you believe in the work you do, I can guarantee something will come out of it, leading you one step closer towards making a truly impactful breakthrough.”

When Sajeev is not making breakthroughs in cancer research, he is either taking part in school clubs such as math, science, global issues and DECA or playing piano at a grade 10 RCM level, practicing whenever he can and playing Bollywood music for his grandmother. 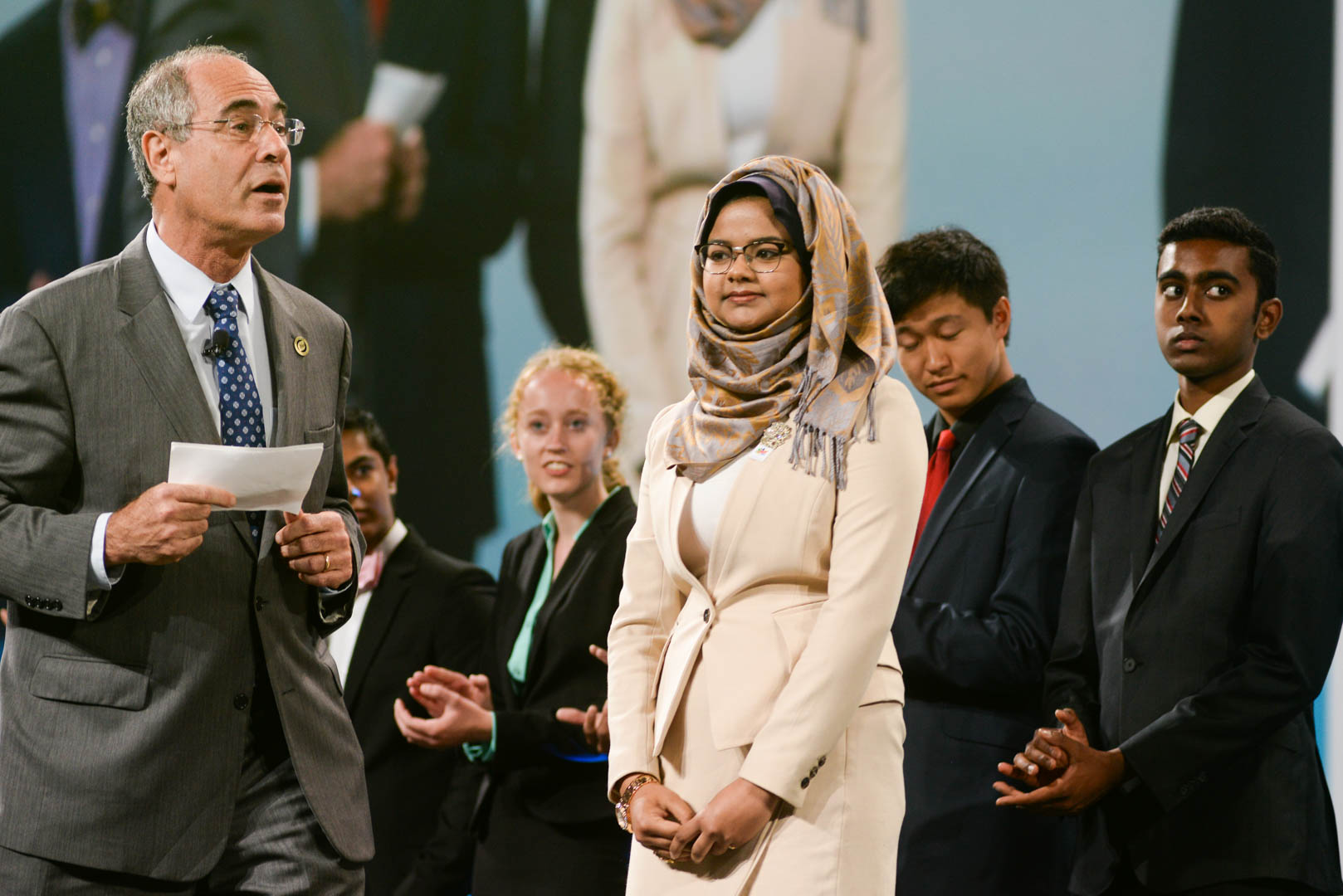 Tasnia has been researching nanoparticles since before entering high school. She has been involved in science fairs throughout her entire high school career, however this year was the first year she won the national SBC competition. As a grade 11 student from Windsor, Ontario, she entered the competition with her research on ferromagnetic nanotherapy as a cancer treatment. Tasnia went on to place second in the International BioGENEius Challenge in San Diego this past June.

Working at the London Health Sciences Center with Dr. Alison Allan has enabled Tasnia to immerse herself in her research. Tasnia discovered that injecting a tumor with ferromagnetic cells and using an external magnetic source to oscillate the particles can kill the cancer and leave the healthy cells unharmed. Due to cancer cells being more heat sensitive than regular cells, the friction produced by the oscillating particles generates enough heat to kill the cancer cells and leaves healthy cells alone. This type of therapy has been shown to theoretically kill 88% of breast cancer cells in less than an hour. Tasnia’s model also allows a physician to input the patient’s information and it will tell them how to carry out the treatment, including how many nanoparticles to use as well as the length of the therapy.

Tasnia has received a lot of recognition for her work, she is a multi-time gold medallist at the Canada Wide Science Fair, she has received the NSERC University of Windsor Promotion of Science Award, The Actuarial Foundation of Canada Award, and has won the Jean Foster Writing Award among others as well. Tasnia is currently in her last year of high school at Vincent Massey Secondary School in Windsor, Ontario.

Curing cancer is just one of Tasnia’s goals in life, she also hopes become a biomedical researcher and to set an example. “I really want to inspire other children to make a change in the world,” she says, “I really don’t think that science has an age limit, I think that anyone can do science.”