Winnipeg Manitoba– April 24, 2014 – 21 students squared off in this year’s Regional 2014 “Sanofi BioGENEius Challenge Canada (SBCC),” each of them presenting their biotechnology research and life-changing discoveries. Projects ranged from bioengineering a kidney, to how prostate cancer cells circulate in the body; from global warming, to how food can effect cancer and much more.

All of the students are deserving of recognition for their research, however 3 students have been named the regional winners. 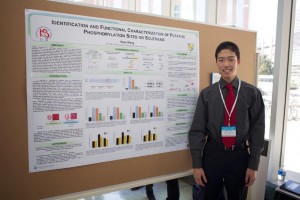 Ryan Wang presents his poster at the BC regional competition, April 22, 2014.

First prize was awarded to Ryan Wang, a grade 12 student at St John’s Ravenscourt, who studied how a serious heart disease called “Cardiac Fibrosis”  might be controlled through biomolecular techniques involving  a compound that regulates the expression of a single gene. This is cutting edge research.

Second prize went to Dareen El Sayed, a grade 12 student at Kelvin High School, who studied how the use of hulled hempseed as a nutritional supplement may be a simple inexpensive and effective way to control high Blood sugar in Type 2 Diabetes.

Third prize went to Michael Xu, a grade 12 student at St John’s Ravenscourt, who studied prostate cancer.  His cutting edge work involved isolating individual prostate cancer cels circulating in the blood and analyzing them to determine their risk to the patient — that is, whether the is cancer aggressive or will it remain indolent.  This could help determine the optimal treatment strategy and supplement the existing PSA tests.

The winner of this competition, Ryan Wang will enter the national competition held at the headquarters of the National Research Council in Ottawa, on May 22, 2014, followed by the SBCC National Awards Ceremony, co-presented with the Partners In Research National Awards, on May 23, 2014.

The fight against cardiovascular disease gained a new ally, a 17 year old